Find out more about how Wolfgang Kaufmann fought his way through the tough world of racing since the early Eighties and what his projects are for the coming year. [more]

Racing-Flair for your desktop! In this sector you can download a number of different wallpapers in 1280x1024 or 1024x768 resolution. [more]

Take a look at the extensive collection of photos of and with Wolfgang Kaufmann! This photo gallery is divided into sections of different racing series and single events such as the famous 24-hour race. [more]

The Spaniard Paco Orti could not find a better nickname in 2001. During a successful Spanish GT season ... [more]

6.06.16 Wolfgang Kaufmann on the podium with Porsche Kremer Racing

After a trouble-free run, P3 is the icing on the cake for Wolfgang Kaufmann in the 24 Hours of the Nürburgring. 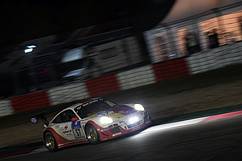 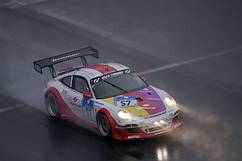 In itself, a race twice round the clock is something special for every racing driver. But the 24 Hours on the Nürburgring are undoubtedly among the highlights of the 2016 season for Wolfgang Kaufmann. Together with Edgar Salewsky, Philippe Haezebrouck, and Eberhard Baunach, he took on the German classic with the Kremer Racing Porsche 997 GT3 KR.

In contrast to other endurance races, the timed practice sessions in a 24 hour race are much less critical for its outcome; too much can happen during such a timespan. Nevertheless the position on the starting grid is not unimportant, if only for the team's prestige. What makes it difficult is the fact that 157 other teams look at it in much the same way. A clear track for quick laps was hard to come by.  My last lap would certainly have been good enough for 2nd or 3rd place on the grid; but a Code 60 zone toward the end of the lap un-did the whole effort, Kaufmann summed up his practice session.

Team Porsche Kremer Racing therefore focussed on the race itself, with Kaufmann taking the start.  After the formation lap, I was able to turn six clean and quick laps, the professional racer from Molsberg says about the early stages of the Eifel marathon. He was scheduled to do an additional lap on the 25km circuit; but dark clouds over parts of the track, and many years of Nordschleife experience, made him decide otherwise.  I came back to the pits a lap early, and together with the team decided to change to rain tyres, he recalls. With the Grand Prix track and many other sections of the track known as  Green Hell still bathed in sunshine, that was not an easy call to make.

What happened over the following minutes, however, would vindicate this decision. Even as Salewsky went out and made his way toward the Nordschleife on wet weather tyres, Race Control threw the red flag that halted the race. Severe rain and in some places even hail washed several competitors off the track - but not the Kremer Porsche that safely returned to its pit box.  the decision to stop the race was entirely justified at that moment, Kaufmann offers his opinion on what he thinks is a commendable call be the officials.  Race director Walter Hornung and his crew did really good work in this 24 hour race. You can tell that their decisions are based on expertise but they are also measured and show common sense. Race organisation was excellent!

After a delay of three hours and still pounded by heavy rain, the Nürburgring 24 Hours were started once again. With his team mates cycling through their stints behind the wheel, night hat fallen when Wolfgang Kaufmann returned to action in the Kremer Porsche. And even if it sounds too good to be true, the  rest of the race, some 18 hours no less, went by without a hitch. Immaculately prepared by Eberhard Baunach's Team Porsche Kremer Racing in Cologne, the Porsche 997 KR ran like clockwork. Fuel and tyres was all the service it needed. At the finish, the 911 showed barely a mark  there were no scratches, not dents, and no trace of the otherwise omnipresent  race tape.

 The car was prepared erfectly, the team was on top of every situation during the whole weekend, Kaufmann was full of praise for the Porsche Kremer crew.

Consistantly fast laps in the closing stages of the race brought Kremer Racing a visit to the podium, with 3rd place in its class SP7.  When you consider that we are one of the last teams to still run the Porsche 997 as everyone else has moved on to the newer 991 generation, finishing on the podium is an amazing result. It was a great performance by the whole Porsche Kremer Racing team, and by my team mates, Kaufmann commented on the result. No drama and a good result - if only all 24 races could play out like this!